The Seahawks started their rookie minicamp Friday; their top 2021 draft pick is now under contract. The team agreed to terms with second-rounder D’Wayne Eskridge, Brady Henderson of ESPN.com tweets. 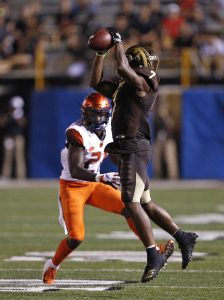 One of college football’s top deep threats in recent years, Eskridge went to the Seahawks at No. 56 overall. The team dipped into the Mid-American Conference’s talent pool here, with Eskridge attending Western Michigan, and will pair him with former Day 2 picks Tyler Lockett and D.K. Metcalf.

Eskridge played parts of five seasons at the mid-major program, redshirting after four games in 2019. In his final two full seasons, the 5-foot-8 wide receiver eclipsed 20 yards per reception. While Eskridge never tallied an 800-yard season, he was on pace to post a dominant stat line as a senior. The MAC limited its schedule to six games in 2020; Eskridge still posted 768 receiving yards and a career-high eight touchdowns.

Eskridge and sixth-round tackle Stone Forsythe are under contract. Fourth-round cornerback Tre Brown is participating in minicamp but is not yet signed.