Charles Woodson To Retire After Season

Charles Woodson held a press conference tonight and announced the Raiders’ final two games in 2015 will be his last, via Scott Bair of CSNCalifornia.com (on Twitter).

One of the league’s best defensive backs throughout his 18-year tenure with the Raiders and Packers, Woodson will almost certainly be a Hall of Famer after making eight Pro Bowls thus far and earning first-team All-Pro recognition three times.

Woodson signed an extension with the Raiders in January, but the 39-year-old safety’s contract expires after this season. He’s playing on a $4.2MM cap number after signing a one-year, $3.2MM pact to stay with the Raiders. 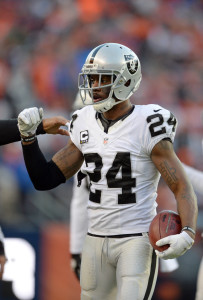 knowing it will be Woodson’s final game in Oakland.

The versatile and durable defender said his body could have probably held up at 40 had he opted for a 19th season, but Woodson decided he’s ready to move on to something else.

“Honestly, I think physically I could do it — my body has responded. But mentally, it’s not there. It’s not gonna happen,” Woodson said.

The Raiders drafted Woodson, the 1997 Heisman Trophy recipient, with the No. 4 overall pick in the 1998 draft. The former two-way Michigan standout won defensive rookie of the year honors in 1998 and, as a Packers cornerback earned defensive player of the year acclaim in 2009.

A member of the 2000s’ All-Decade team, Woodson has 65 career interceptions, a total that leads all active players and ties him for fifth in NFL history. To illustrate how prodigious Woodson’s ball-hawking acumen became, DeAngelo Hall‘s 32 interceptions are the second-most among active defenders.

The four players who have more INTs than Woodson, a list topped by Paul Krause with 81, are all enshrined in Canton.

The Fremont, Ohio, native switched to safety before the 2012 season and quickly became one of the NFL’s best despite not moving to the back line until his age-36 slate.

Since re-signing in Oakland, Woodson’s started all 46 games for the Raiders. Oakland’s been thin at safety this season, with Nate Allen spending half the season on IR-DTR, but Woodson’s been solid. Recovering three fumbles in addition to his five INTs, Woodson rates as Pro Football Focus’ 28th-best safety. Oakland’s had to slot less-than-ideal cogs alongside Woodson in Allen’s absences, including journeyman Taylor Mays and ex-cornerback Travis Carrie.

Woodson’s eight takeaways this season rank second in the NFL.

Allen remains under contract after signing a hefty deal this offseason, and Woodson’s age made acquiring a safety a priority prior to the impending free agent’s abrupt announcement.

The Raiders possess an NFL-most $61.64MM in salary cap space after this season to help procure Woodson’s replacement.

4 comments on “Charles Woodson To Retire After Season”