8:05pm: Calvin Johnson is serious about considering retirement, and he’s mentioned his thoughts to Lions teammates over the last few weeks, Ian Rapoport of NFL.com tweets.

Meanwhile, a source tells Ed Werder of ESPN.com (on Twitter) that Johnson told his mother that he isn’t sure he wants to play any more. Johnson cleaned out his Lions locker at the end of the season, unlike other veteran players on the team. “Calvin is the kind of guy who says, “If I don’t feel I’m into this 100%, then I need to decide if want to be in at all,” a source close to Megatron told Werder (link).

1:30pm: Most discussion and speculation involving Calvin Johnson in recent weeks has centered around the question of whether the Lions will consider cutting the veteran receiver or asking him to take a pay cut this offseason. However, it sounds like there’s no guarantee Johnson will even continue his playing career in 2016. 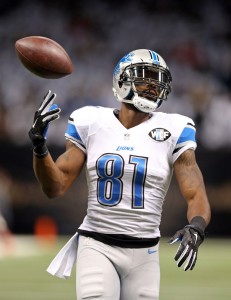 “Like many players at this stage of their career, I am currently evaluating options for my future,” Johnson said in a statement, per Tim Twentyman of DetroitLions.com (Twitter links). “I would expect to have a decision regarding this matter in the not-too-distant future.”

Dave Birkett of the Detroit Free Press confirms that Johnson has mentioned the subject of retirement to at least one former teammate, and writes that several people who know the 30-year-old believe that scenario is not out of the question.

While it would be a shock if Megatron walked away from the NFL this year, all the wear and tear he has endured over his career has made him consider the possibility, according to Birkett, who notes that the Lions wideout has been plagued by ankle and finger issues in recent years.

Since leading the NFL with 122 receptions and 1,964 yards in 2012, Johnson has seen his production decline a little. Still, he continued to be one of the league’s more productive pass catchers in 2015, with 88 catches, 1,214 yards, and nine touchdowns.

Johnson remains under contract with the Lions for four more seasons, but his deal doesn’t include any more guaranteed money, and his cap hit is set to increase to $24MM+ in 2016. The Lions could nearly cut that figure in half by releasing the former second overall pick, or could create nearly $16MM (the amount of his 2016 salary) in cap savings by cutting him with a post-June 1 designation. So if Megatron does decide to keep playing, he and the Lions may have to agree to a reworked contract, assuming he wants to remain in Detroit.