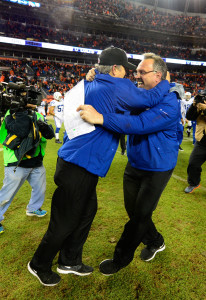 Manusky, at one time, was considered to be a potential head coaching candidate if the team ever fired head coach Chuck Pagano. As it turns out, the Colts’ defense struggled in 2015 and owner Jim Irsay actually decided to give Pagano a four-year extension on Monday night. Manusky will now be seeking a new job for 2016, but it’s not immediately clear if he’ll be able to land another DC gig.

Manusky, Rapoport tweets, was running Pagano’s scheme without many playmakers to work with. Now, it will be interesting to see what kind of hire Pagano and GM Ryan Grigson will make. Manusky joined the staff in 2012, around the same time of Pagano’s hiring. He previously spent time as defensive coordinator with the Chargers and 49ers. The Colts finished 27th in total yards per game (379.1) and 25th in points per game allowed (25.5) in 2015.