Andre Johnson Preparing To Play In 2016

8:50am: Johnson’s agent, Kennard McGuire, tells Aaron Wilson of the Houston Chronicle (Twitter link) that his client doesn’t intend to call it a career anytime soon. “Retirement hasn’t been discussed,” McGuire said. “Andre is training and preparing for next season.”

8:01am: Calvin Johnson isn’t the only longtime star receiver who is contemplating retirement this offseason, according to Ian Rapoport of NFL.com, who tweets that Andre Johnson also “has a decision” to make. Rapoport adds that Johnson has played his last down in Indianapolis, suggesting that the Colts plan to move on from him this winter even if he continues his career. 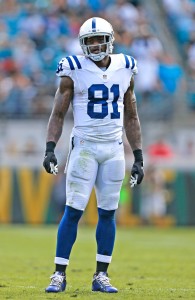 After spending 12 seasons in Houston, Johnson signed a three-year contract with the Colts a year ago, and looked poised to enjoy the benefits of catching balls from Andrew Luck after playing with a cavalcade of mediocre quarterbacks over the years with the Texans. However, Luck missed more than half the season, and Johnson struggled, averaging a career-low 31.4 receiving yards per game. For the season, he had 41 catches for 503 yards and four touchdowns, easily the worst full-season marks of his career.

Rapoport’s suggestion that Indianapolis is expected to release Johnson comes as no real surprise, since it seemed unlikely the club would want to keep his $7.5MM cap hit on the books after such an underwhelming 2015 campaign. If they cut him, the Colts could reduce Johnson’s cap hit by $5MM, leaving just $2.5MM in dead money on their cap.

Given how weak this year’s free agent market for wide receivers is, Johnson would likely receive interest from a handful of teams if he were to become available. But for a player who averaged more than 1,100 receiving yards per season during the first 12 years of his career, earning seven Pro Bowl nods during that time, last year’s drop-off was precipitous, so the 34-year-old will first need to determine whether he wants to keep playing. Based on Rapoport’s report, it sounds like that decision has yet to be made.