Former Mississippi State quarterback Dak Prescott, who has been projected as a second- or third-round prospect in this year’s draft, was arrested for DUI early Saturday morning, according to a report from Michael Bonner and Sarah Fowler of The Clarion-Ledger. The arrest took place near the Cotton District in Starkville at 12:45 a.m., and Prescott was later released on bond. No further details are available at this time, and Prescott’s representation, Pro Sports Management, has refused comment. 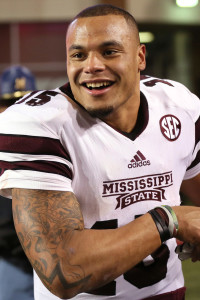 Prescott is one of the most-beloved Mississippi State players in the history of the program, having led the Bulldogs to a five-week stint as the No. 1 team in the country, as well as an Orange Bowl appearance, in the 2014 season. A dynamic dual-threat talent, Prescott holds every school passing record and was named MVP of this year’s Senior Bowl after guiding Mississippi State to a convincing victory in the 2015 Belk Bowl. The Bulldogs also took home the 2013 Liberty Bowl with Prescott under center, and he, along with head coach Dan Mullen, was a driving force behind the school’s rise to relevance in the powerhouse SEC.

NFL Network draft guru Mike Mayock lists Prescott as the fifth-best quarterback in this year’s draft class, behind presumptive first-rounders Carson Wentz, Jared Goff, and Paxton Lynch, and one spot behind Michigan State’s Connor Cook. Matt Miller of Bleacher Report tweets that Prescott has been moving up his draft board, and Prescott has been mentioned as at least a speculative fit for the Cowboys and Broncos. He met with every team in the league at this year’s scouting combine, and as Tyler Dunne of The Buffalo News tweets, he was set to meet with the Bills prior to the draft.

Prescott was in Starkville for Mississippi State’s pro day on Thursday, which helped cement his status as a second-day prospect. His DUI arrest, however, will almost certainly impact his draft stock.