Quarterback Matt McGloin wasn’t the only member of the Raiders to be receive a second-round tender offer. According to Tom Pelissero of USA Today (via Twitter), the team has assigned an identical tender to safety Neiko Thorpe. The second-round tender is worth $2.553MM, which would ultimately be the 26-year-old’s non-guaranteed base salary for next season. If Thorpe signs elsewhere, the Raiders will now be able to recoup a second-round pick. 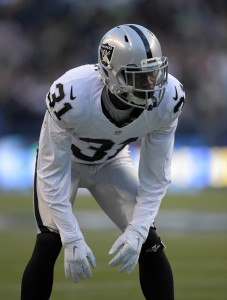 The former undrafted free agent out of Auburn had a career season in 2015. Thorpe compiled career-highs in tackles (40), passes defended (six), and interceptions (one) while starting two of his 14 games. The cornerback joined the Raiders in early 2014 after having spent time with the Chiefs and the Toronto Argonauts.

We learned yesterday that the team had also assigned a low-end tender to offensive lineman Matt McCants, and Pelissero tweets that defensive end Benson Mayowa had received an identical tender offer. The 24-year-old spent the past two seasons with Oakland, and he finished 2015 with 16 tackles and one sack.