The Steelers have added some depth to their defensive line, signing Ricardo Mathews to a contract, the team announced today in a press release. 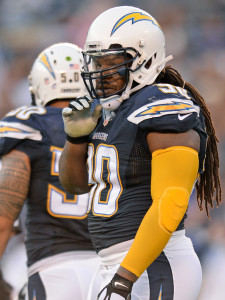 Matthews, 28, joined the Colts as a seventh-round pick in 2010, and primarily served as a backup during his four years in Indianapolis. During the past two seasons, Matthews has started nine games for the Chargers, picking up a total of 43 tackles and 2.5 sacks in his two years with the club.

Although he earned a career-high seven starts for San Diego in 2015, Pro Football Focus viewed Mathews as one of the NFL’s least effective defensive linemen in 2015, ranking him 121st out of 123 qualified interior defenders.

Mathews is unlikely to play a significant role up front for the Steelers, but he could be a valuable depth piece for a club that lost Steve McLendon in free agency and no longer has Cam Thomas under contract. The fact that Mathews is making the transition from another 3-4 defense is also a positive sign for Pittsburgh.