The 49ers have made no attempt to re-sign veteran receiver Anquan Boldin, according to Matt Maiocco of CSNBayArea.com, but that could change when San Francisco begins OTAs. Per Maiocco, if head coach Chip Kelly is underwhelmed with the club’s pass-catching options, he could work with general manager Trent Baalke to bring Boldin back into the fold. 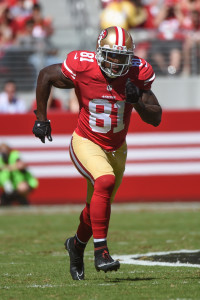 [RELATED: 49ers never made a serious push for Josh Norman]

Boldin has taken just one free agent visit thus far (with Washington), but he said he earlier this month that he’s not interested in rushing into a signing. “I’m taking my time right now,” Boldin said. “It’s the first time in 13 years I’ve been a free agent, so I get to pick where I want to go now. I’m definitely going to take my time and make the best decision for me and my family.”

Boldin, 35, is working out in South Florida and staying in shape as he waits for the right opportunity. Even though he has enjoyed a long career and even has a Super Bowl ring, the veteran says that he is not thinking about retirement. Last season, Boldin recorded only 69 catches for 789 yards and four touchdowns, so he’s probably looking to go out with a stronger campaign. Boldin’s struggles, in large part, can be attributed to the turmoil surrounding the 49ers and their difficulties at quarterback.

Though Maiocco indicates that Boldin could be an option for the Niners down the line, a reunion seems unlikely, if only because Boldin says he’d like to play for a contender, something San Francisco is not expected to be in 2016. The 49ers seem likely to roll with their receiving corps (where Torrey Smith is the only veteran of the bunch), and possibly invest a mid-round pick at the position.