Browns Willing To Trade No. 2 Pick?

The idea of the Browns dealing away the second overall pick is gaining steam, according to Lance Zierlein of NFL.com (Twitter link), who reports that there is “more and more smoke” around the concept of Cleveland trading down in the draft. The club’s intention would be to select a quarterback in the second round, per Zierlein, who adds that “something big” is likely to happen involving the top five picks. 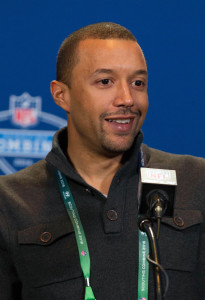 The Browns, of course, have already added Robert Griffin III this offseason, signing the reclamation project to a two-year deal, and also have veteran Josh McCown under contract. The overwhelming majority of mock drafts have Cleveland selecting either Jared Goff or Carson Wentz second overall, but the Browns have a lot of holes elsewhere on the roster, and trading back could give the team the extra ammunition it needs to fill out their squad. Just this March, the Browns saw a ton of talent walk out the door via free agency, as Mitchell Schwartz, Alex Mack, Travis Benjamin, and Tashaun Gipson all found contracts elsewhere.

Depending on how far back the Browns trade in the first round, they could still have a shot at someone like Paxton Lynch, but Zierlein’s report indicates that Cleveland would instead target a quarterback in Round 2, where it currently holds pick no. 32, the first selection of Day 2. Lynch (possibly), Connor Cook, Christian Hackenberg, and Cardale Jones are among the signal-callers that could be available at that juncture, or even later.