Jared Allen To Retire As Viking

APRIL 14: Allen has signed a one-day contract with the Vikings to officially retire as a member of the team.

FEBRUARY 18: Veteran defensive end Jared Allen, who finished the 2015 season with the Panthers, has decided to call it a career. Allen announced his retirement today in a video published to his Twitter account. 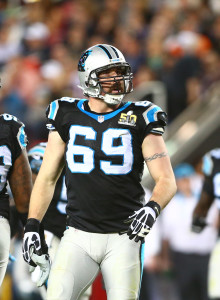 “I just want to say thank you for an amazing 12-year career,” Allen said, joking about riding off into the sunset before literally “riding off” on horseback. The 33-year-old also issued a formal statement on his retirement (TwitLonger link via Mike Garafolo of FOX Sports), which read, in part:

“I want to take this time to thank my family, friends fans, and teammates who have given their continued support throughout my 12 year career. It’s been a great ride for me, and I couldn’t be more grateful for the memories. It is with a great deal of thought and consideration, that I have decided that I will not return to football next year.”

Since entering the NFL as a fourth-round pick in 2004, Allen has been one of the NFL’s most dominant pass rushers, leading the league in sacks on multiple occasions and earning four first-team All-Pro nods. In 187 career regular-season games, Allen racked up 136 sacks, 32 forced fumbles, 19 fumble recoveries, and even six interceptions.

Allen didn’t exactly enjoy a storybook ending to his NFL career, but this year’s Super Bowl represented the first time that the veteran defensive end got a chance to play for a championship — he fought through a broken foot in order to take the field for Super Bowl 50.

Although he hadn’t a played in a Super Bowl until this year, Allen appeared in playoff games during his time in Kansas City and Minnesota. His best individual seasons came in 2007 – when he totaled 15.5 sacks in his final year with the Chiefs – and in 2011, when he nearly broke Michael Strahan‘s single-season record by piling up 22 sacks. Having spent the brunt of his 12-year NFL career with the Chiefs and Vikings, Allen signed with the Bears as a free agent in 2014, then finished his career in Carolina, after being traded to the Panthers during the 2015 season.

Because they acquired him in a trade, the Panthers won’t carry any dead money on their salary cap this year for Allen. The club also won’t be on the hook for his $8.5MM base salary.

6 comments on “Jared Allen To Retire As Viking”