JUNE 1st, 9:09am: The Bills announced that Henderson is “expected” to rejoin the team on Thursday.

MAY 31st, 5:25pm: The Bills are worried that Henderson won’t be able to play this season after undergoing a pair of surgeries, per Jason Cole of Bleacher Report (video link). Longer term, there’s concern that Henderson’s condition will prevent him from maintaining the weight and strength necessary to last in the NFL.

MAY 30th, 2:59pm: Henderson is now cleared to practice and will be in town on Tuesday, his agent tells Dunne (Twitter link).

2:18pm: Henderson’s agent says that the Bills right tackle plans on flying into town this week and being ready for the 2016 season, Tyler Dunne of The Buffalo News tweets.

While Rex Ryan apparently has not reached out to Henderson, the Bills medical staff has been in the loop, according to the tackle’s agent (link). Since leaving the team in 2015, Henderson has had two surgeries to help correct his stomach issues.

12:33pm: The football status of tackle Seantrel Henderson remains a mystery for both the Bills front office and his teammates. The team’s onetime starter has not spoken with coach Rex Ryan in quite some time and now his teammates also say that they have lost touch with him, as Tyler Dunne of The Buffalo News writes. 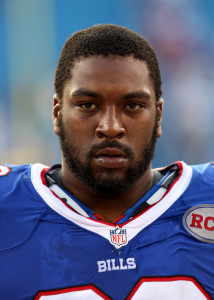 Henderson started all 16 games in his rookie season in Buffalo, and had started 10 games for the team in 2015 before he was sidelined with Crohn’s disease. One report in March indicated that Henderson was starting to get back to full health and was putting weight back on his 6’7″ frame. However, it’s not clear if Henderson is looking to play football in 2016 or at any point in the future.

One source indicated to Dunne that Henderson had stomach surgery “a few months ago” in relation to his Crohn’s disease. However, when asked to handicap the odds of Henderson playing for the Bills next season, one teammate responded, “Nobody knows.” Another team source questioned Henderson’s work ethic, pointing to past problems with marijuana. The Bills were able to draft Henderson in the seventh round of the 2014 draft in part because of his multiple failed drug tests at the University of Miami. He also reportedly tested positive for marijuana at the scouting combine.

With Henderson away from the team, the Bills are currently using Jordan Mills as their first-team right tackle in practice with the hope that 2014 second-rounder Cyrus Kouandjio can put it all together and win the starting job.