Despite a suffering a torn ACL late last year, Charles Tillman clearly enjoyed his time with the Panthers last season. He enjoyed being with the Panthers so much, in fact, that they’re the only team he’s willing to play for in 2016. 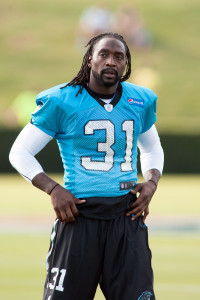 The fumble-forcing dynamo similar comments back in February when he was on the brink of free agency. Tillman, though, is a ways away from being a serious candidate to sign with a team. Tillman is still recovering from the ACL tear he suffered in Week 17 and is about two months away from being able to partake in football activities. The 35-year-old corner says that signing with a team near the end of training camp serves as a realistic goal at this point.

“Being in Carolina felt like I had been there my entire career,” he said. “The team, the community, the atmosphere, that vibe. The Carolinas — North Carolina and South Carolina — they showed a lot of love.”

A Bears starter for 12 seasons, Tillman missed most of the 2013-14 seasons with torn triceps injuries but managed to play in 12 games for the Panthers. Carolina, however, has remade its cornerback corps after rescinding Josh Norman‘s franchise tag. The Panthers certainly have the cap room to add veterans to the mix, but the team seems intent on giving reps to young players instead.

The Panthers selected James Bradberry in the second round, Daryl Worley in the third, and Zack Sanchez in the fifth. Now, Bene Benwikere stands as the team’s only surefire veteran contributor, as Roster Resource details. In theory, the Panthers might want to consider a vet like Tillman, but there has been no indication they are interested in a reunion.