Michael Vick Wants To Play In 2016

Michael Vick didn’t play much in 2015, attempting just 66 passes in relief of Ben Roethlisberger, but the veteran quarterback isn’t ready to retire just yet. As Vick explained to Jordan Raanan of NJ.com, Vick believes he has one more season left in him. 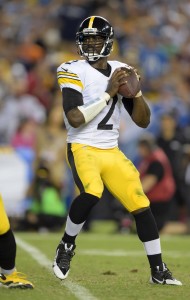 “I haven’t officially retired,” Vick said. “As of right now, it’s pretty much at a stalemate type of thing. Just taking the days as it comes, but most importantly for me, I just have to continue to work out and train. I would love to play this year, suit up for another run at it. I still feel like I could play and there is a lot left in the tank.

“It does matter getting the right offer. I don’t think at this stage you just jump right out there and then just take any opportunity even though if this is going to be my last year, which is what I feel like I’m leaning toward because of where I’m at in my life, I do want to suit up one more time, I do want to put the helmet on one more time. I don’t want it to end the way it ended the last couple years.”

Vick, who will turn 36 later this month, has expressed his desire to play one final year before, and told Josina Anderson of ESPN.com that he wouldn’t extend his career past 2016 — in other words, if no clubs come calling this year, he’ll retire. Whether any teams show interest is an open question, as Vick hasn’t posted above-average results since 2010. The Steelers are thought to have moved on, and at this point, it wouldn’t be a surprise if Vick has to wait until a club suffers a quarterback injury during camp before he lands a deal.