Earlier this offseason, the Ravens used the franchise tag on kicker Justin Tucker and he quickly accepted. Months later, Tucker still doesn’t have a long-term deal in place with the team. However, he says it’s only a matter of time before a new pact is hammered out. 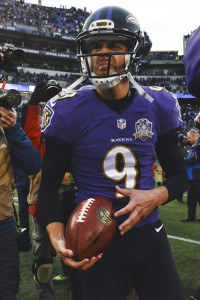 “As of right now, there hasn’t been a whole lot happening, but there’s still time. Like I’ve said before, I’m optimistic that something will get done. It’s a matter of when, not if,” Tucker said (via Jake Lourim of The Baltimore Sun). “I know there’s a lot of things to juggle from their perspective, so all I can do is just be patient and let the process unfold how it’s going to unfold,” he said. “There’s no sense in complaining about it. I’m definitely in a very fortunate position, and I just hope that I can take this one year and turn it into four or five, or perhaps even more.”

Tucker, 26, is entering his fifth season with the Ravens. For his career, Tucker has connected on 130 of 148 field-goal attempts (87.8%), with 12 of those 18 overall misses coming from 50 yards or longer. He has also nailed an impressive 10 game-winning field goals, including three in 2015.

Although signing the franchise tender secures Tucker for the 2016 season, he and the Ravens could still reach a longer-term agreement anytime between now and July 15th. A year ago, we saw the Patriots use their franchise tag on Stephen Gostkowski, who signed the tender days later, then agreed to a multiyear contract on July 15th. The long-term extension reduced Gostkowski’s present-day cap hit while giving him a more significant guarantee up front. I’d expect the Ravens to explore a similar scenario for Tucker, who may be looking to exceed Gostkowski’s four-year, $17.2MM deal.