The Panthers acquired veteran punter Andy Lee and a 2017 seventh-round pick from the Browns in exchange for a fourth-round draft choice in 2018 and punter Kasey Redfern. 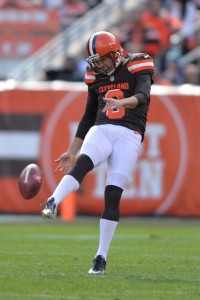 Lee, 34, spent the first eleven years of his career with the 49ers before being traded to the Browns in 2015. The veteran has never missed a regular season game and has three First-Team All-Pro nods to his credit (2007, 2011, 2012) with two Pro Bowl selections (’07, ’11). The Pittsburgh product averaged 46.7 yards per punt last season, slightly higher than his career average. He’ll now step into the role that was originally supposed to be filled by Mike Scifres.

The Panthers signed Redfern less than two weeks ago as they waived Swayze Waters.