The Lions worked out pass-rusher Quinton Coples today, as Ian Rapoport of NFL.com tweets. However, Detroit will not be signing him at this time. 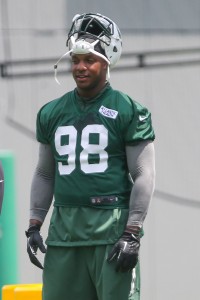 Defensive end Ziggy Ansah is expected to be out for Sunday’s game and perhaps longer as he deals with a high ankle sprain. The Lions wanted to take a closer look at Coples in the event that Ansah is out for a while, but it doesn’t sound like they were blown away by what they saw from the No. 16 overall pick in the 2012 draft. The Lions’ decision to pass on Coples could also be a sign that Ansah’s return is not far off.

Coples was cut by the Dolphins in February before his fifth-year option for the 2016 season became fully guaranteed. He hooked on with the Rams, but L.A. dropped him in late August. Coples had his best year as a pro in 2014, but even that amounted to just 35 tackles and 6.5 sacks, modest totals for a first-round pass rusher.