Cortland Finnegan‘s time with the Saints did not last long. The cornerback was released this afternoon, as Mike Florio of PFT tweets. 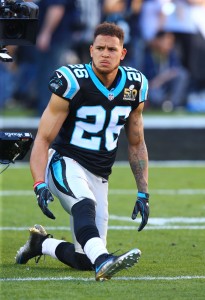 The 32-year-old Finnegan announced his retirement in March 2015, but he returned to football in November when he signed with the Panthers. Finnegan wound up playing in five regular-season games and all three of the NFC champions’ playoff contests, including Super Bowl 50. The veteran, who recorded 18 tackles, failed to add to his career interception total (18) for the second straight year.

The Saints are slated to start Delvin Breaux and P.J. Williams at cornerback, as shown on Roster Resource. Finnegan was expected to provide depth behind both players this offseason, but he apparently didn’t do enough over the last month to make the Week 1 roster.

Finnegan’s deal with the Saints called for him to earn a $985K base salary with a $50K signing bonus and a $650K cap hit due to the minimum salary benefit. New Orleans is now only on the hook for the $50K bonus.