The Seahawks have promoted running back Terrence Magee from their practice squad to the active roster, the club announced today. Bob Condotta of the Seattle Times speculated yesterday that the Seahawks were saving their open roster spot to add another back given that Thomas Rawls is unlikely to play on Sunday due to a shin injury. 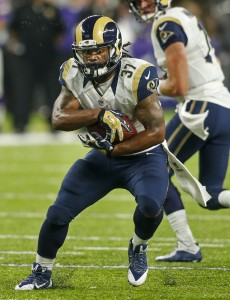 Rawls is listed as doubtful for the Seahawks’ Week 3 game against the 49ers, and if he’s unable to go, Christine Michael will draw the start, head coach Pete Carroll told reporters, including Sheil Kapadia of ESPN.com. “[Michael is] averaging five yards a carry for a reason,” said Carroll. “He had a really good offseason. He had a terrific camp. All indications that he’s ready for a bigger load. He’s had 20-something carries so far. He’s ready to carry the ball 20-something times in a game. He could be fine with that.”

Seattle now has five running backs on it roster: Rawls, Michael, Magee, and rookies C.J. Prosise and Alex Collins. Prosise, like Rawls, is also battling an injury, as he recently broke a bone in his wrist. However, Carroll has sounded optimistic that Prosise will be able to suit up against the 49ers, according to Condotta. He and Magee could theoretically share the Seahawks’ third-down back role.

Additionally, Carroll “hinted” that the Seahawks could still employ a fullback during Week 3 despite the fact they don’t have an official FB on the roster, having recently released veteran Will Tukuafu. The most likely candidate to fill that role is tight end Brandon Williams, tweets Zach Whitman of Three Sigma Athlete.

Magee, 23, went undrafted out of LSU in 2015. After spending most of of last season bouncing on and off the Ravens’ practice squad, Magee lasted on the Rams’ roster until cutdowns earlier this month.