Jacoby Brissett To Start For Patriots

Rookie Jacoby Brissett will start at quarterback for the Patriots today, according to Adam Schefter of ESPN.com (Twitter link). Brissett and New England will face the Bills as the club seeks to jump out to a 4-0 start. 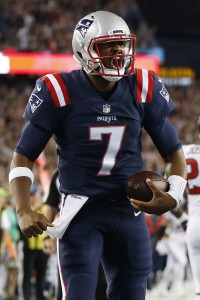 [RELATED: Patriots Tried To Trade For Terrelle Pryor In 2015]

Jimmy Garoppolo, meanwhile, will be inactive today as he continues to deal with an AC joint injury, tweets Schefter. The third-year pro required a shot to practice last week, and was limited to roughly 100 throws per day (as opposed to the typical gameday total of 200 or so), per Mike Garafolo of NFL.com (Twitter link). Pain management and strength had been the two obstacles to a Garopppolo start, reports Albert Breer of TheMMQB.com (Twitter link), and it’s the latter that will keep Garoppolo on the sidelines.

After Garoppolo was taken out by Kiko Alonso‘s hit during a win over the Dolphins, Brissett was put into a game for the first time in his NFL career. The third-round rookie got the job done, completing 6-of-9 passes as he guided New England the rest of the way, and then led the Patriots to a 27-0 victory over the Texans in Week 3. Brissett, however, suffered a thumb injury in the rout and was listed as questionable for today’s contest.

Given that New England doesn’t have another quarterback on its roster, wide receiver Julian Edelman will presumably serve as the backup signal-caller once again. Tom Brady, of course, will return from suspension and start against the Browns in Week 5.