Falcons tight end Jacob Tamme is done for the season. Tamme announced this morning that he underwent an operation on his shoulder that will rule him out for the rest of the year. The Falcons formally placed him on IR on Monday. The 31-year-old tight end faces a lengthy recovery from this shoulder setback. 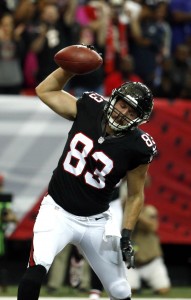 “Unfortunately I had to have season-ending surgery this morning. Thank you to everyone who has been praying and sending support. I love our team, so this situation brings great disappointment,” Tamme tweeted. “But this is my [first] surgery in [nine years]. I feel very blessed.”

With Tamme out, the Falcons will lean more on Levine Toilolo and third-round pick Austin Hooper. Behind them will be UDFA Joshua Perkins.

Tamme’s season ends with 22 catches for 210 yards and three touchdowns, making him Atlanta’s top offensive producer at the tight end position. He came to Atlanta on a two-year, $3.2MM base value deal before the 2015 season, so he’ll be a free agent after the season is through.

Tamme first made a name for himself as a favored receiver in Peyton Manning‘s Colts offense. Later, he reunited with Manning on the Broncos, but he saw his role reduced as he battled for playing time with Julius Thomas and Virgil Green. Last year, Tamme showed what he could do in a featured role, hauling in 59 grabs for 657 yards. That was a career-high in yards for Tamme and his second-highest reception total.

Tamme turns 32 on March 15th, right around the start of the 2017 free agency period.