The Lions tried out free agent linebackers Sam Barrington and Sio Moore, according to Mike Florio of Pro Football Talk (Twitter link). Those two have been on the market since the Chiefs cut them Monday. 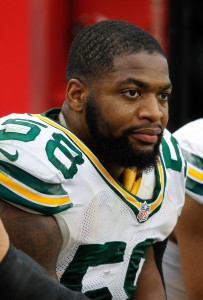 Before joining the Chiefs via waivers prior to Week 1, Barrington spent the first three seasons of his career with the Packers – one of the Lions’ NFC North rivals. Barrington suited up for 14 games and made seven starts in 2014, but he combined for just eight appearances in his other two seasons in Green Bay. Only one of those appearances came last year for Barrington, who suffered a major foot injury in Week 1. He ended up logging two appearances with the Chiefs before they parted with him.

Moore lasted less than a month in Kansas City, which signed him shortly after the Colts waived him Oct. 4. Moore only saw action in one of the Chiefs’ games, and he didn’t record a statistic in KC after beginning the year with 30 tackles in Indianapolis. The 26-year-old’s best seasons were his first two in the NFL – 2013 and ’14 – as he combined for 26 appearances (22 starts), 140 tackles, 7.5 sacks and two forced fumbles with the Raiders. Oakland, which used a third-round pick on Moore, then traded him to Indy for a sixth-rounder prior to last season and the Liberia-born defender hasn’t had much success since.

It’s currently unclear if the Lions are interested in signing either Barrington or Moore. The DeAndre Levy-less club made other changes to its linebacker group late last month in re-signing Josh Bynes and trading Kyle Van Noy to the Patriots.