The Marcel Reece tour continues. Today, the fullback tried out for the Seahawks, Field Yates of ESPN.com tweets. 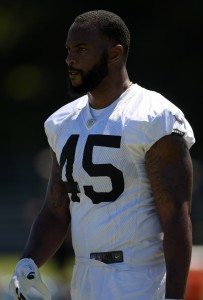 Reece was hit with a PED suspension that cost him part of the 2016 season. When he was eligible to return in late September, the Raiders released him. Since then, Reece has auditioned for the Patriots, Jets, and Bengals, but has yet to find an NFL home.

Reece, 31, is a multiple-time Pro Bowler thanks to his blocking ability and pass-catching acumen. In 2015, Reece caught 30 passes for 269 yards and three touchdowns and also added 36 rushing yards. A versatile back who can play a variety of roles, Reece averaged 34 receptions per season from 2010-15.

The Seahawks already have a fullback on the roster in Will Tukuafu, but he has appeared in just 45 offensive snaps this year. Seattle could be looking at Reece for a more traditional fullback role.