The Chargers have requested permission to interview Patriots defensive coordinator Matt Patricia, Adam Schefter of ESPN.com tweets. Patricia is the first known target of the Bolts in their coaching search. 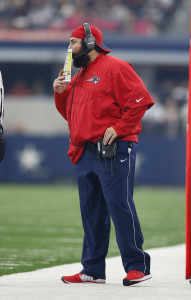 Patricia has also been linked to the Rams’ head coaching vacancy and he’s a popular name this offseason, even if he’s not as hyped up as colleague Josh McDaniels. The Chargers just fired an offensive-minded head coach in Mike McCoy, so Patricia could offer a change in philosophy. The Pats finished the regular season with the fewest points allowed of any team in the league. Meanwhile, the Bolts allowed 423 points, the fourth-highest in the NFL.

The Chargers are one of six teams now in search of a new head coach.