The Chargers coaching staff has seen plenty of turnover, and now there’s another name to add to the list of potential additions. NFL.com’s Ian Rapoport reports (via Twitter) that the organization will interview Gus Bradley for the role of defensive coordinator. The former NFL head coach is the “favorite” for the gig. 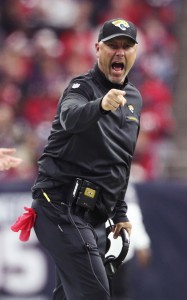 Bradley has been a relatively popular name since he was fired by the Jaguars in mid-December. The 50-year-old was reportedly atop the Redskins’ list of potential defensive coordinator candidates. Bradley has a natural connection to that organization, as the coach worked under general manager Scot McCloughan when the duo was in Seattle. The Browns also reportedly reached out to Bradley regarding their defensive coordinator vacancy.

Bradley had plenty of success as the Seahawks’ defensive coordinator, a position he held from 2009 through 2012. However, things didn’t go nearly as well during his head coaching tenure in Jacksonville. In his three-plus seasons with the organization, Bradley compiled a 14-48 record. His .226 winning percent is the second-lowest mark in league history.

The Chargers don’t necessarily have an opening at the position, as defensive coordinator John Pagano is still under contract. However, there seems to be a belief that recently-hired head coach Anthony Lynn will want to hire his own personnel. Bradley and Lynn have been connected throughout the hiring process, and our own Sam Robinson noted that “a Lynn-Bradley ticket was previously thought to be the way the Bills would go.”

For what it’s worth, it appears that the Chargers will be retaining offensive coordinator Ken Whisenhunt.

One comment on “Chargers To Interview Gus Bradley For DC Job”