Guard Ronald Leary sought a trade out of Dallas last offseason because he was poised to serve as a backup in 2016. The Cowboys weren’t willing to oblige, which ended up being a plus for both them and Leary. After starting left guard La’el Collins went on injured reserve in late September, Leary took his place and thrived as part of an elite offensive line. The timing was great for Leary, who’s scheduled to hit the open market in March. 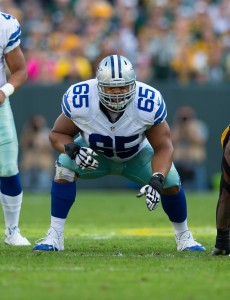 While Leary is open to staying in Dallas, the 27-year-old realizes Collins’ return to health will likely prevent that, according to Clarence Hill of the Fort Worth Star-Telegram.

“Going into the season I didn’t think I was going to be playing at all,” Leary said Monday. “As far as free agency, that’s one thing I’m just going to let it play itself out, see how things work out and talk with my agent and see how things go from there.”

Leary, who entered the NFL in 2012 as an undrafted free agent from Memphis, has spent his entire career with the Cowboys. He started in 35 straight appearances over his first three seasons, but he dealt with a groin injury in 2015 and Collins usurped his No. 1 role. With Collins on the shelf for most of this season, Leary made 12 starts in 13 games and ranked an impressive 25th in overall performance among Pro Football Focus’ 76 qualified guards.

Given that the Cowboys have Collins and standout Zack Martin in the fold at guard, their 34-31 divisional-round loss to the Packers on Sunday stands to go down as Leary’s last outing with the club. Evidenced by the four-year, $29MM extension Jets guard Brian Winters landed Monday, Leary is on the verge of cashing in someplace. That could be New Orleans, which pushed to acquire him last spring. Regardless of where he signs, Leary’s departure will likely net the Cowboys a compensatory draft pick, which would make their refusal to trade him a year ago look even better.