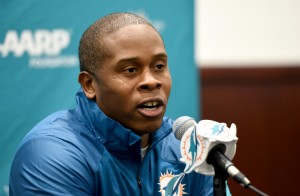 While Joseph hasn’t yet spoken with Denver’s brass this week, the former University of Colorado quarterback did interview with the club before it hired the now-retired Kubiak in January 2015. It’s also notable that Joseph once worked under the Broncos’ most recent defensive coordinator, Wade Phillips, in Houston.

“I have so much respect for that man,” Joseph said of Phillips in October (via Cameron Wolfe of the Denver Post).

Despite Joseph’s affinity for Phillips, Marvez reported Thursday that the latter is likely on his way out of Denver. If hired, Joseph would probably promote defensive backs coach Joe Woods to replace Phillips, whose contract is up.

Joseph, who’s preparing to counter the Steelers’ offense in this weekend’s wild-card round, is in the midst of his first season as a coordinator. While it hasn’t gone well statistically (Miami finished the regular season 18th in scoring, 19th in DVOA and 29th in total defense), Joseph is nonetheless drawing plenty of interest from teams without head coaches. That could add to the Broncos’ urgency to hire the 44-year-old, who’s facing competition from Falcons offensive coordinator Kyle Shanahan – who prefers Denver’s job to others – and Chiefs special teams coach Dave Toub. Bills interim head coach Anthony Lynn‘s name has also come up, though the Broncos haven’t sought an interview with him, according to Klis (Twitter link).