It doesn’t appear free agent cornerback Alterraun Verner will go without an employer for long. Since the Buccaneers released Verner on Thursday afternoon, four to five teams have expressed interest in the seven-year veteran, he told SiriusXM NFL Radio (Twitter link). Verner also thanked the Bucs for their decision to release him early, thereby enabling the 28-year-old to reach the open market a couple weeks in advance of March 9. 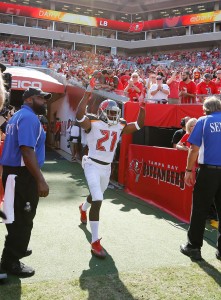 A fourth-round pick of the Titans in 2010, Verner has appeared in 16 regular-season games in all but one campaign, 2014, and he only missed two contests then. The 5-foot-10, 181-pounder has also racked up 70 starts and 15 interceptions, though he saw his playing time wane dramatically over the past two seasons. Verner started just three games in 2016, tying a career low, and only appeared in 22.8 percent of Tampa Bay’s defensive plays.

Verner, who will now look to join his third team, likely won’t approach the four-year, $25.5MM pact he inked with the Bucs as a free agent in 2014. At that point, he was a 25-year-old coming off a second-team All-Pro season. Nevertheless, he could be of interest to clubs that aren’t in position to pay premium prices for pending free agent corners like A.J. Bouye, Trumaine Johnson, Logan Ryan and Stephon Gilmore, among others.