Patriots backup Jimmy Garoppolo remains the Browns’ No. 1 choice at quarterback, but the club has backup plans in case the price for Garoppolo is too steep. Cleveland will have Bills signal-caller Tyrod Taylor on their “radar” if he’s released by Buffalo, reports Mary Kay Cabot of Cleveland.com. 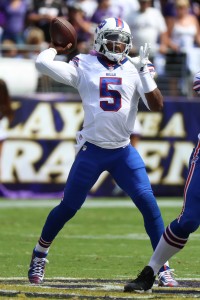 The Bills have until March 11 to make a decision on Taylor: the club holds a $15.5MM option bonus on its quarterback that would lock in $30.75MM in total guarantees. The club is expected to release Taylor before that decision is due, but the hiring of new head coach Sean McDermott and offensive coordinator Rick Dennison could change that view. While Buffalo’s front office is said to be in favor of cutting Taylor, McDermott’s view on Taylor is an unknown, as Vic Carrucci of the Buffalo News writes, while Dennison’s arrival is thought to be a positive for Taylor given that the pair has a prior working relationship.

Meanwhile, the Browns have been linked to a number of quarterback options this offseason, and are likely to pursue a new signal-caller through the draft, free agency, or via trade. Cleveland now has at least one connection to Taylor, as the club today hired former Bills quarterbacks coach David Lee to the same role. Lee, who worked with Taylor during the past two seasons, will presumably offer Browns head coach Hue Jackson a fresh opinion on Taylor.

Cleveland won’t be the only club to express free agent interest in Taylor, who’s averaged roughly 3,000 yards passing, 18 touchdowns, and six interceptions during his two campaigns as a starter. The Cardinals are also expected to pursue Taylor if he hits the open market, as Jason La Canfora of CBSSports.com recently reported.