While the Browns could use the franchise tag to stop pending free agent wide receiver Terrelle Pryor from hitting the open market, the team would much rather retain him on a multiyear contract, reports Mary Kay Cabot of cleveland.com. As a result, the Browns are “redoubling efforts” to re-sign Pryor and will meet with agent Drew Rosenhaus this week, tweets Jason La Canfora of CBS Sports. Cleveland and Rosenhaus will have “strong discussions,” a source told Cabot. 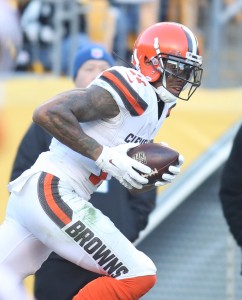 As a 27-year-old who possesses size (6-foot-4, 223 pounds) and speed, Pryor will be among the most sought-after players available this offseason if he actually reaches free agency. It’s arguable he’s currently among the top two unsigned wideouts in the NFL, joining the Bears’ Alshon Jeffery, after Pryor broke out last season as part of a one-win team. Despite having to work with five quarterbacks, most of whom were mediocre or worse, Pryor (an ex-QB himself) piled up 77 receptions, 1,007 yards and four touchdowns on 140 targets in his first serious action as a receiver.

Notably, both Pryor and the coach who has developed him as a pass catcher, the Browns’ Hue Jackson, have spoken highly of each other over the past year. Pryor has made it known that he’d like to stay under Jackson’s tutelage, though he cautioned in December that “it’s got to come down to what my agents think is right for me.” Those agents might not have as much say as they’d like if the Browns slap the estimated $15.826MM franchise tag on their client between Feb. 15 and March 1. A long-term pact, on the other hand, could net Pryor at least $10MM per year and $28.5MM in guarantees (the same deal the Rams gave Tavon Austin last summer), CBS Sports’ Joel Corry posited in November.

Regardless of whether they tag or re-sign Pryor, the Browns – with a league-high amount of cap space – shouldn’t have difficulty retaining him if that’s their goal. The team has already stopped its top pending defensive free agent, linebacker Jamie Collins, from getting to the market, having awarded him a four-year, $50MM deal in January.