Fresh off winning their fifth Super Bowl title, the Patriots have decisions to make on a cavalcade of pending free agents before the market opens March 9. The best of the bunch is likely star linebacker Dont’a Hightower, who implied Wednesday that he’ll be amenable to playing next season as the Patriots’ franchise player if they’re unable to reach a long-term deal, per Mike Reiss of ESPN.com (Twitter links). 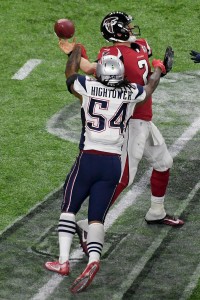 “That’s a lot of money,” Hightower told ESPN’s Wendi Nix regarding the possibility of the Patriots tagging him.

If New England does designate Hightower as its franchise player, it’s likely to cost the club in the neighborhood of $14.754MM. That might be the route the Patriots have to take, too, as Hightower rejected a contract extension worth more than $10MM per year prior to the season, reports Ian Rapoport of NFL.com (Twitter link). Now the Patriots might have to fork over a deal in the five-year, $60MM range with $30MM in guarantees, contends Jeff Howe of the Boston Herald (via Twitter). That would be similar to the pact ex-teammate and fellow linebacker Jamie Collins inked last month with the Browns, who handed him $50MM ($26MM guaranteed) over four years.

Hightower, a five-year veteran who will turn 27 next month, has been working toward a mega-deal since entering the NFL as the 25th overall pick in 2012. The ex-Alabama standout has started in 64 of 67 regular-season appearances and amassed 17 sacks along the way. He was also hugely instrumental in the Patriots’ shocking Super Bowl LI victory over the Falcons on Sunday, when his fourth-quarter strip sack of quarterback Matt Ryan proved crucial in helping the Patriots to erase what was then a 16-point deficit en route to an overtime win.

Going forward, one concern with Hightower is that he has missed at least two games in four seasons (2013 was his only 16-game campaign), including three in 2016 as he dealt with knee and shoulder problems. Still, he ranked as Pro Football Focus’ 12th-best linebacker among 87 qualifiers last year and won’t need to undergo knee or shoulder surgery this offseason, tweets Howe.