The Broncos will attempt to address their defensive line during the free agent period, according to Mike Klis of 9NEWS. Former Dolphin Earl Mitchell is one candidate to join Denver’s front, and Klis reports Mitchell will meet with the Broncos on Wednesday night and Thursday morning. Mitchell has a busy schedule, as he’ll visit the Seahawks on Monday/Tuesday, the 49ers on Tuesday/Wednesday, and the Falcons on Thursday/Friday. 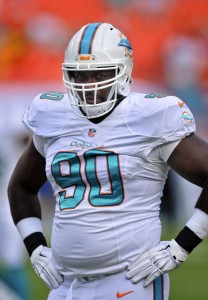 If Denver is able to sign Mitchell (who would play end in the Broncos’ 3-4 scheme), it will then focus on securing a replacement for nose tackle Sylvester Williams, per Klis. Williams, a former first-round pick, is expected to test the free agent waters on March 9. The Broncos are also interested in retaining defensive lineman Vance Walker, who missed the entirety of the 2016 after tearing his ACL, according to Klis.

On the offensive side of the the ball, the Broncos will target at least one lineman in free agency, reports Klis. Denver holds an expensive option on left tackle Russell Okung, right tackle Donald Stephenson is expected to be released, and the Broncos’ guards could also be upgraded. Denver’s offensive line ranked as just the league’s No. 24 unit in 2016, according to Pro Football Focus’ year-end rankings.