Patrick Mahomes II’s stock appears to be on the rise. Today, the Texas Tech quarterback said that he received a second-round grade from the NFL’s College Advisory Committee (via Mike Florio of PFT). 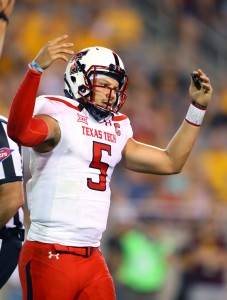 For a while, the consensus seemed to be that UNC’s Mitch Trubisky would be the first QB off the board in this year’s draft with Clemson’s Deshaun Watson, and Notre Dame’s DeShone Kizer following afterwards. Now, it seems like Mahomes could crack the top three at the position and, according to one report, possibly go inside of the first three overall picks. The Browns, 49ers, and Bears hold the first three picks and they could all be in search of a QB come draft time. If Mahomes doesn’t hear his name called that early, Jason La Canfora of CBSSports.com says that the Texans at No. 25 likely represent his floor.

The scouting combine in Indianapolis should give us a better idea of where Mahomes might go in April. In a draft class that has no slam dunks at the quarterback position, we could see lots of board shuffling between now and the spring.