The Patriots will look to capture their fifth Super Bowl championship today, and next offseason, they plan to seek an extension for quarterback Tom Brady, according to Ian Rapoport of NFL.com (via Twitter). They believe Brady will play another three to five years, which is why they are currently willing to trade promising backup Jimmy Garoppolo (Twitter link). 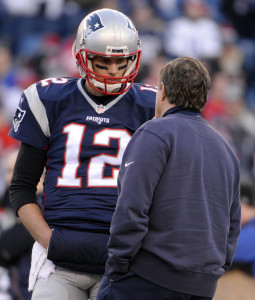 Brady is currently under contract through 2019, his age-41 season, so a new deal would likely take him through the end of his playing career. He is set to earn a total of $14MM next year, $22MM in 2018, and another $22MM in 2019. Andrew Luck is currently at the top of the quarterback heap in terms of average annual value ($24.59MM), although Matthew Stafford may will surpass him in that regard this offseason. Aaron Rodgers, meanwhile, is the current pacesetter with respect to total guarantees ($54MM).

An extension after the 2017 campaign would allow the Patriots to spread out Brady’s subsequent $22MM cap hits, which are still pretty reasonable for a quarterback of his caliber. Indeed, Brady’s 2016 campaign was one of his best, as he threw 28 touchdowns to just two interceptions en route to yet another AFC Championship, the seventh of his career. He has captured four Super Bowl titles, a slew of AFC East titles, three Super Bowl MVPs, and two league MVPs.

Plus, he has been durable. He missed almost all of the 2008 campaign due to injury, but otherwise has not missed a game for injury reasons since he captured the starting quarterback job in 2001. Of course, his prodigious offensive lines and the offensive system in which he plays have been a big part of that, but since neither of those things figure to change anytime soon, there is no reason to think that Brady will be more susceptible to injury moving forward than he has been in the past.

Garoppolo, meanwhile, is expected to receive significant interest in the trade market this offseason, and while the Patriots may be hesitant to have Jacoby Brissett serve as their primary backup, the haul for Garoppolo could be too good to pass up.

34 comments on “Patriots To Seek Tom Brady Extension Next Offseason”