Martellus Bennett is set to hit the free agent market on March 9, and although a “mutually respectful relationship” exists between he and the Patriots, Bennett may leave for a better offer, according to Ian Rapoport of NFL.com (Twitter links), who adds there’s a “real possibility” Bennett is suiting up for another club in 2017. 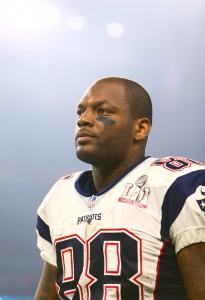 Although Rapoport alludes to Bennett’s asking price without naming a specific figure, Bennett reportedly turned down a $7MM per year extension offer from New England before the 2016 campaign got underway. However, Mike Reiss of ESPN.com previously reported that the Patriots explored adding only a single year to Bennett’s deal, which would explain why Bennett rejected the proposal. Speaking shortly after New England’s Super Bowl victory earlier this month, Bennett made it clear that he’s eyeing a significant raise this offseason.

The Patriots acquired Bennett, who turns 30 next month, and a sixth-round pick from the Bears in exchange for a fourth-round pick, and the acquisition paid immediate dividends. Appearing in all 16 games, Bennett managed 55 receptions for 701 yards and seven touchdowns, and helped New England overcome the loss of fellow tight end Rob Gronkowski.