DeMarcus Ware‘s retirement after 12 NFL seasons came despite multiple teams offering the revered pass-rusher more than $7MM per year. NFL.com’s Jane Slater reported the Broncos and Cowboys didn’t reach the numbers stage in their respective talks with Ware, and Tom Pelissero of USA Today (via Twitter) shed some light on another team that’s looking for pass-rushing help. 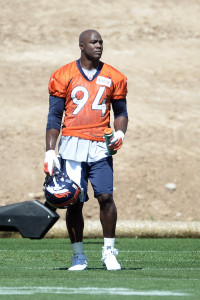 The Rams hosted Ware on a visit, per Pelissero. Other than the Broncos and Cowboys, a Ware-to-Los Angeles scenario made the most sense due to Wade Phillips‘ presence with the team. Phillips coached in Dallas and Denver, overseeing the edge defender’s work for six seasons. Three of Ware’s four first-team All-Pro appearances came under Phillips’ guidance.

Ware also delivered as a member of the Broncos, and Phillips joined up during Ware’s second Denver season. He registered 45 sacks during his three-season All-Pro run under Phillips in Dallas and added 11.5 in his final two Broncos seasons. Ware, though, came up big in both the 2015 AFC title game and Super Bowl 50 despite missing five games due to a back injury that season. Denver’s then-right outside linebacker hit Tom Brady seven times in the Broncos’ narrow AFC title conquest and sacked Cam Newton twice two weeks later.

The Rams are converting to a base 3-4 defense under Phillips and recently traded William Hayes to the Dolphins. The team doesn’t house a slew of edge-rushing depth behind Robert Quinn, though, despite employing interior-defending dynamo Aaron Donald and quality complement Michael Brockers.