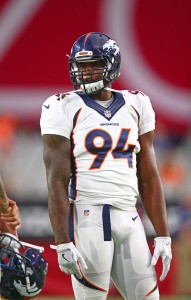 “I’m hanging up my cleats and beginning the journey to my next destination,” Ware wrote as a part of his statement.

Ware, 35 in July, piled up 21.5 sacks in three years as a member of the Broncos, giving him 138.5 for his career. Just over a week ago, there was word that he wanted to end his career as a member of the Cowboys. Broncos GM John Elway also wanted to re-sign the veteran. Despite the options that were out there, Ware has decided to focus on other ventures and spend more time with his family. He leaves the sport eighth on the all-time sack list.

A 2017 return would have represented Ware’s 13th NFL season, and there were offers for the pass-rusher to suit up again. Ware turned down proposals in the $7-$8MM-per-year range, per Jane Slater of NFL.com (on Twitter). “A few” teams made these kind of offers, per Slater, potentially meaning Ware drew serious interest from beyond the Broncos or Cowboys. Slater adds to the notion that other teams were pursuing Ware, noting the Cowboys and Broncos didn’t reach the offers stage of this pursuit (Twitter link). Those talks didn’t expand beyond the formative stage, per Slater.

Ware said in December he intended to play next season but ultimately decided to move on to other things.

The future Hall of Famer enjoyed some of his best seasons with Dallas, a run that included four first-team All-Pro selections and seven consecutive Pro Bowl nods. He continued to be productive in Denver, even though he wasn’t fully healthy in the last two seasons.

We here at PFR wish Ware the best in retirement.