Keenan Robinson paid visits to the Bengals and Bills this month, but his most recent NFL employer looks to have made a suitable offer. The Giants reached an agreement to re-sign the linebacker, Mike Garafolo of NFL.com reports (on Twitter). 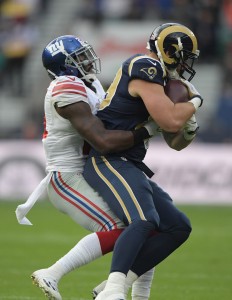 Robinson spent one season with Big Blue, 2016, after playing three with the Redskins. He will continue to serve as a key component on the Giants’ second level, which has by far the least capital allocated to it on a team stacked with high-end defensive end and cornerback contracts. The Giants categorized Robinson as a lower-tier priority this offseason but engaged in talks with the UFA before free agency’s outset. After tending to bigger business, Big Blue agreed to retain the former fourth-round pick.

The Bengals signed Kevin Minter soon after Robinson’s Cincinnati summit, and the Bills used a second-round pick on Reggie Ragland last year. The Giants aren’t especially keen on paying linebackers big deals. That trend should continue, with Olivier Vernon and Jason Pierre-Paul having $17MM-AAV contracts. Robinson’s deal will likely be a midlevel accord.

A former multiyear Redskins starter, the 27-year-old Robinson made 79 tackles and deflected a career-high seven passes. Pro Football Focus, though, assigned Robinson a grade that placed him among the 10 worst full-time ‘backers last season. Playing on 71 percent of the Giants’ defensive snaps, Robinson started six games and played in every contest for a defense that made immense strides after a putrid 2015 performance.