Following three seasons with the organization, it sounds like DeSean Jackson‘s tenure with the Redskins is over. According to Mike Jones, Master Tesfatsion, and Liz Clarke of The Washington Post, it’s expected that the two sides “will part ways.” Meanwhile, the trio report that the Patriots, Eagles, Buccaneers, and Cowboys have inquired on the 30-year-old. 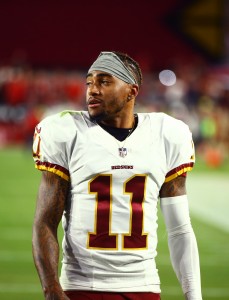 Following an underwhelming 2015 campaign, Jackson bounced back in 2016. In 15 games, the veteran hauled in 56 receptions for 1,005 yards and four touchdowns. In nine NFL seasons, the wideout has averaged 55 receptions, 980 yards, and five touchdowns in 14 games per season.

The Buccaneers would be an intriguing option, as Jackson could team up with Mike Evans to provide Jameis Winston with a pair of dynamic receiving options. The veteran would easily fit the role of the veteran long threat in New England, and he’d provide the Eagles with the receiver they’ve been seeking since they lost Jackson following the 2013 season. The Cowboys would be an intriguing option, but it’d be hard to envision Jackson replacing Dez Bryant and Cole Beasley from the starting lineup.