As Jay Glazer of FOX Sports reported earlier today, nearly every NFL front office is interested in free agent guard Kevin Zeitler. The Saints can now be added to that list, as New Orleans may pursue the soon-to-be ex-Bengals lineman, tweets Herbie Teope of the Times-Picayune. 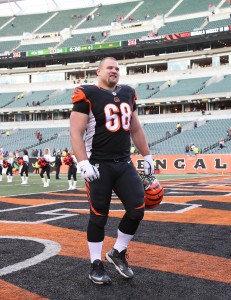 While Cincinnati has all but given up on re-signing Zeitler, the rest of the league is ready to pounce, meaning Zeitler (27 today) should be able to garner a contract in the $12MM range. Already, the Colts, Jaguars, and Browns have been linked to Zeitler, who ranks as PFR’s No. 5 overall free agent. A former first-round pick, Zeitler has started 71 games for the Bengals over the past five years, and hasn’t missed a contest in either of the past two campaigns.

If New Orleans signs Zeitler, the club would probably end any discussion of bringing veteran right guard Jahri Evans back for a 12th season. While the Saints could conceivably ink both guards and move Andrus Peat to right tackle, such a shift would be overly complicated and difficult, especially given that neither Zeitler nor Evans has ever played on the left side.