First-round pass-rushing prospect Takkarist McKinley will undergo shoulder surgery after the Combine. The UCLA-developed talent has been battling a right shoulder issue for over a year, and as a result of this impending operation, McKinley will be out for 4-6 months, Jeff Legwold of ESPN.com reports. 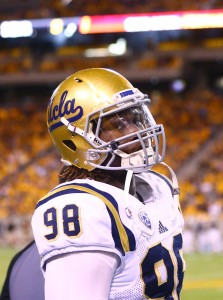 Unlike some other soon-to-be rookies who opted to skip workouts at the Combine, McKinley will perform drills for teams before going under the knife. The bulk of his position group’s tests occur on Sunday, with only the bench press taking place today. McKinley said he has a torn right labrum and a fracture in that shoulder socket. Although he said he sustained the injury during the Bruins’ 2015 season, he’s played through it since.

“Why get surgery before the combine? This is a dream come true to me. I’m here to knock it out,” McKinley said. “I had an MRI and the doctor was pretty much amazed I had played with it. Me, I just told my trainers at UCLA, ‘Just tape me up I’m ready to go.”

This loomed as a possibility back in February but now could affect McKinley’s draft status. The above timetable would stand to shelve McKinley until at least training camp, with the possibility he will miss part of his team’s preseason as well.

McKinley rates as one of the top pass-rushers in this draft and is a projected first-round pick. He projects as a 4-3 defensive end or 3-4 outside linebacker. In 2016, McKinley evidently played through this malady and collected 18.5 tackles for loss.

5 comments on “Takkarist McKinley Out 4-6 Months”