The Vikings announced early Thursday morning that they have signed free agent running back Latavius Murray. Murray’s deal with Minnesota is for three years, but can be voided after one season, Field Yates of ESPN.com (on Twitter). This means Murray could have a shot at free agency again in 2018 and that could be very lucrative for him if he gets back on track.

If the deal doesn’t void out, it’ll be a three-year deal worth roughly $15MM, a source tells Ian Rapoport of NFL.com (on Twitter). Over the three year period, the deal includes $8.5MM in guaranteed cash, Ben Goessling of ESPN.com tweets. 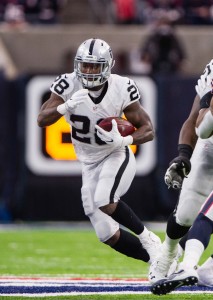 The arrival of Murray could spell the end of Adrian Peterson‘s time in Minnesota. Peterson remains in free agent limbo, but it’s hard to see either Peterson or Murray agreeing to a timeshare with one another. Peterson, of course, is a prideful guy and is out to prove that he can still play like a star even after his latest setback. Murray, meanwhile, signed a deal with a one-year escape hatch. In order for him to maximize his value for next spring, he’ll have to get the majority of the carries in Minnesota. I would speculate that Murray’s reps asked the Vikings if they intended on re-signing Peterson. If they had said yes, Murray probably would have sought out this one-year, prove-it situation elsewhere.

Murray averaged 4.0 yards per carry in each of his two seasons as the Raiders’ primary starter. He rushed for 12 touchdowns in 2016, but young upstarts Jalen Richard and DeAndre Washington started cutting into his workload. He surpassed 1,000 yards in 2015 but rushed for only 788 last season. The Raiders reportedly had interest in bringing Murray back after he explored the open market, but we haven’t heard much on that front in the last seven days.

This offseason, we’ve seen two players sign multi-year deals with performance-driven clauses that can allow them to escape after one year: Murray and Cordarrelle Patterson. The two offensive standouts switched teams this month with Patterson joining the Raiders and Murray going to Minnesota.