Over a month since the start of free agency, defensive tackle Johnathan Hankins surprisingly remains available, having not found any offers to his liking. The Giants, with whom Hankins spent the first four seasons of his career, have had an offer on the table to re-sign him since before the market opened. It turns out it’s a four-year, $28MM proposal, reports Paul Schwartz of the New York Post. 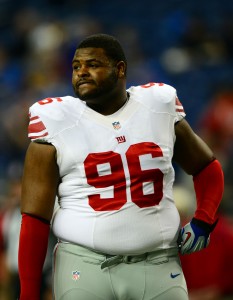 It’s unclear exactly how much guaranteed money Big Blue is including in its offer, but Schwartz notes that it’s similar to the pact fellow D-tackle Nick Fairley signed with the Saints last month. Fairley’s contract, also worth $28MM over four years, includes $14MM in guarantees. While such a deal hasn’t appealed to Hankins, it’s fair to call it a generous offer at this stage of free agency. A source Schwartz spoke to agrees, saying, “At some point, you got to be pragmatic about it.”

Hankins, whom most teams view as a two-down player, has generated little legitimate interest outside of New York this offseason. Both the Dolphins and the Colts have kicked the tires, but the former would only add him as a rotational player and the latter is uninterested in his asking price, which started out at $15MM per year before quickly dropping to $10MM annually, according to Schwartz.

While Hankins, 25, is coming off the second 16-start season of his four-year career, he has racked up just three sacks (all in 2016) since a seven-sack 2014. He also ranked a subpar 72nd in overall performance among Pro Football Focus’ 127 qualified interior defensive linemen last season. As such, the Giants don’t regard him as a must-sign player, relays Schwartz, who writes that the team could rescind the offer if it addresses the middle of its D-line in the draft.