Seventh-year linebacker Andrew Gachkar will visit the Bills on Tuesday, Mike Garafolo of NFL.com tweets. It will be the Bills’ second meeting with a linebacker in as many days. They met with Gerald Hodges today. 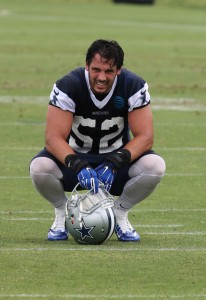 This will also be Gachkar’s second visit this offseason. He met with the Patriots two weeks ago. Gachkar spent the past two seasons with the Cowboys, serving as a backup linebacker and special-teamer.

Buffalo’s defensive second level has some returning cogs, like Lorenzo Alexander and Preston Brown, and saw Reggie Ragland return to workouts last week. The Bills’ linebacker group, though, has some questions after converting to a 4-3.

Gachkar operated as a part-time player with the Cowboys, making just 10 total tackles since signing there in 2015. He played just 76 snaps last season, and 45 of those came in a Week 17 game that saw Dallas use many backups after clinching home-field advantage. The former Chargers seventh-round pick played in all 32 Cowboys regular-season games throughout the duration of his contract, however.