Chargers wideout Dontrelle Inman is set to miss some time. According to ESPN.com’s Adam Schefter (via Twitter), the receiver underwent core muscle surgery and is expected to be out for six weeks. This is relatively good news for the organization, as Inman should be healthy in time for training camp. 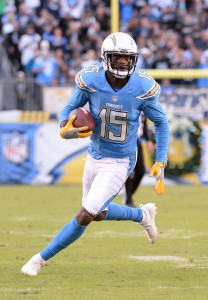 Inman toiled in the Canadian Football League after going undrafted out of Virginia in 2011, but he’s seemingly found a home with the Chargers, where he’s spent the past three seasons. The 28-year-old has a breakout campaign in 2016, hauling in career-highs in receptions (58), receiving yards (810), and touchdowns (four). Earlier this offseason, Inman signed his second-round tender assigned by the Chargers, meaning he’s set to earn a non-guaranteed $2.797MM base salary for the 2017 season. Next offseason, the wideout will be an unrestricted free agent.

Fortunately for Los Angeles, the team has plenty of depth at wide receiver, so they should be able to make up for Inman’s absence if he’s out longer than expected. With Keenan Allen and rookie Mike Williams presumably atop the depth chart, Inman will be competing with Tyrell Williams and Travis Benjamin to be the team’s third receiver.