This could spell trouble for Michael Floyd. The Vikings wide receiver tested positive for alcohol during his house arrest this week, according to TMZ Sports. The violation of house arrest rules could result in jail time. 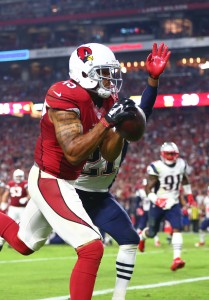 Floyd’s alcohol monitoring system flagged five events during June 11th and 12th. At least three of those events were characterized by a rep for the Scottsdale City Court as “high alcohol tests.” Per the terms of his deal, Floyd was forbidden from drinking any alcohol while confined to his home. Meanwhile, the wide receiver claims that the positive tests were caused by drinking Kombucha, a fermented tea with a very low percentage of alcohol.

Floyd petitioned the court to remove his alcohol-testing ankle bracelet because he said it would hinder him while training. The court obliged, but required that Floyd instead undergo random breath tests. Those breath tests unearthed his alleged alcohol consumption and, on top of that, Floyd apparently skipped one of the scheduled tests.

In 2016, Floyd was cuffed in Arizona for a “super extreme DUI,” leading to his release from the Cardinals. The receiver was quickly claimed by the Patriots, but New England made little effort to retain him. Despite all the baggage surrounding him, the Vikings signed him in May.

Floyd‘s one-year deal with the Vikings doesn’t contain any guaranteed money, meaning that Minnesota can part ways with the troubled receiver without any financial penalty.