Ravens tight end Crockett Gillmore will undergo meniscus surgery on Monday, according to Ian Rapoport of NFL.com (Twitter link). Baltimore will be able to further assess Gillmore’s condition once the operation is complete, per Rapoport. 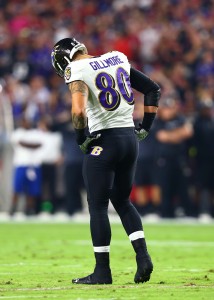 Meniscus injuries typically require one of two treatments: either a trim, or a full repair. A trim will typically allow a player to return much more quickly following the surgery. A full repair, meanwhile, is better for the long-term health of the player’s knee, but often requires a season-long absence. Ravens running back Kenneth Dixon, for example, recently underwent a repair, meaning he’ll miss the 2017 campaign.

Baltimore’s tight end depth has already been reduced this offseason, as Dennis Pitta was released after suffering a possibly career-ending injury, while Darren Waller is suspended for the entire season. Maxx Williams and Ben Watson, meanwhile, are recovering from injuries, leading the Ravens to sign veteran tight end Larry Donnell earlier today.

Gillmore, 25, was last productive during the 2015 season, when he posted 33 receptions for 412 yards and four touchdowns. In 2016, Gillmore appeared in only seven games, while dealing with back and knee injuries.