It’s official now. Le’Veon Bell is a part of the Steelers’ 53-man roster going into the 2017 season. 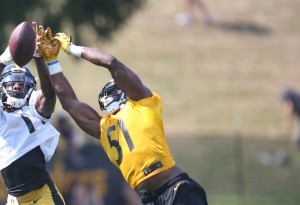 The Steelers activated the fifth-year running back on Saturday and cut linebacker Steven Johnson, whom they re-signed earlier this week, Ed Bouchette of the Pittsburgh Post-Gazette tweets.

Johnson played in Pittsburgh last season, seeing action in six games, after stays with the Broncos and Titans from 2012-15. The Steelers cut Johnson upon slashing their roster to 53 players but re-signed him two days later. The 29-year-old Pennsylvania native could conceivably be brought back soon.

Bell, who signed his franchise tender earlier this week, will play in Week 1 for the first time since the 2014 season. He missed the past two Steelers openers because of suspensions.