We learned last night that at least two teams had serious interest in trading for former 49ers linebacker NaVorro Bowman before he was released by San Francisco, and it turns out that one of those interested teams was the Saints. As ESPN’s Adam Schefter reports, the 49ers agreed to trade Bowman to New Orleans for a seventh-round draft pick, but the Saints learned the veteran linebacker preferred to be a free agent and talk to all teams before deciding on one. As such, the 49ers opted to grant Bowman’s wish and give him his release instead of going forward with the trade. 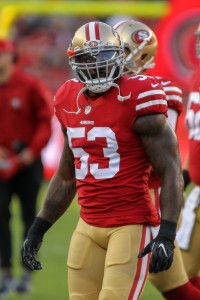 Schefter adds that San Francisco also engaged in trade talks with the Ravens, Browns, and Panthers, but none of those teams appear to be vying for Bowman’s services in free agency. Instead, as Ian Rapoport of NFL.com tweets, there is strong mutual interest between Bowman and the Raiders, and Bowman appears set to visit Oakland in the coming days.

In related news, Schefter reports that the 49ers have not had any trade talks involving running back Carlos Hyde — despite speculation to the contrary — and they do not plan to have any such talks. We heard just last week, of course, that San Francisco was attempting to extend the oft-injured RB, who is set to become a free agent at the end of the year.