Chargers’ Tuerk Not Yet Reinstated

Several players are slated to return to action this week after starting the year with four-game bans, but that won’t be the case for center Max Tuerk. The Chargers lineman has not yet been reinstated because he has yet to complete his obligations as outlined by the league’s policy on performance enhancing drugs, Howard Balzer of BalzerFootball.com tweets. 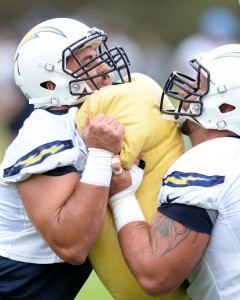 Tuerk was hit with the suspension late in training camp. At the time, he blamed a tainted supplement for the positive test.

“This offseason, I made the mistake of taking over-the-counter supplements,” Tuerk said in a statement. “In doing so, I opened myself up to the possibility of consuming a tainted supplement – something that ultimately led to a positive test for a banned substance. I accept responsibility for my actions and understand the NFL’s policy is very clear on this matter. This is a very hard way to learn a lesson, and I will never make this mistake again.”

Tuerk, a product of nearby USC, missed his entire rookie season due to injury. It’s not clear when he’ll finally make his NFL debut.

The Bolts lost to the Eagles 26-24 on Sunday, bringing them down to 0-4. Next up is a road contest against the winless Giants in which someone’s 0 has to go.

2 comments on “Chargers’ Tuerk Not Yet Reinstated”